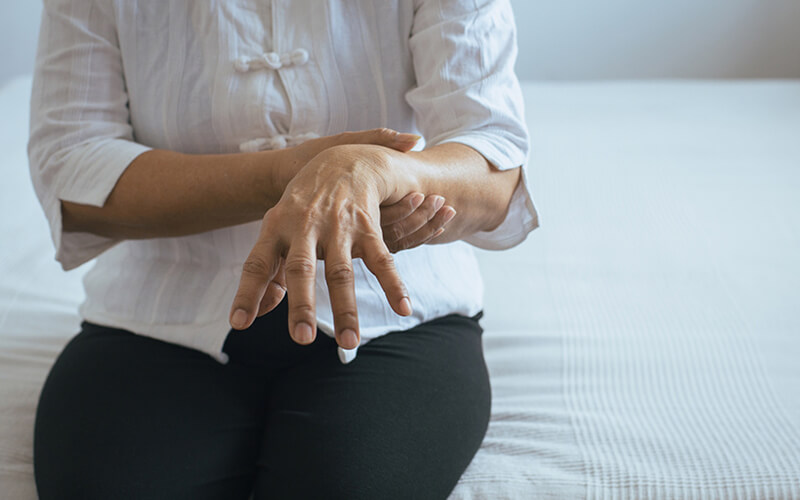 Asterixis, or flapping hand tremor, is a neurological disorder that causes a person to lose motor control of certain parts of their body. It’s most common in the wrist and fingers and it can cause the muscles to abruptly and intermittently become lax, resulting in a “flapping” motion.

Asterixis typically looks like irregular and involuntary jerking motions of the hands– hence where the name flapping hand tremors came from. Asterixis can be very frustrating to deal with and can reduce one’s quality of life, so it’s important to find the right treatments if you’re suffering from this flapping tremor.

In this blog post, we’ll be going over what the symptoms of asterixis are, asterixis causes, how to treat asterixis, and more. To learn more about how you can identify and treat flapping hand tremors, continue reading the post or use the links below to skip to a section of your choice.

What Are Flapping Hand Tremors?

What Are Flapping Hand Tremors?

So, what is asterixis? Asterixis is a disorder that causes you to lose motor control of some parts of your body, namely the hands. It’s often called a flapping hand tremor because the loss of motor control causes irregular jerking movements in the hands. It’s more common for asterixis to affect both sides of the body, rather than just one side.

And what are tremors, you ask? A tremor is an involuntary, rhythmic muscle contraction that causes shaking movements in one or more parts of the body. There are several different types of tremors, but essential tremor is the most common, and it usually affects your hands. 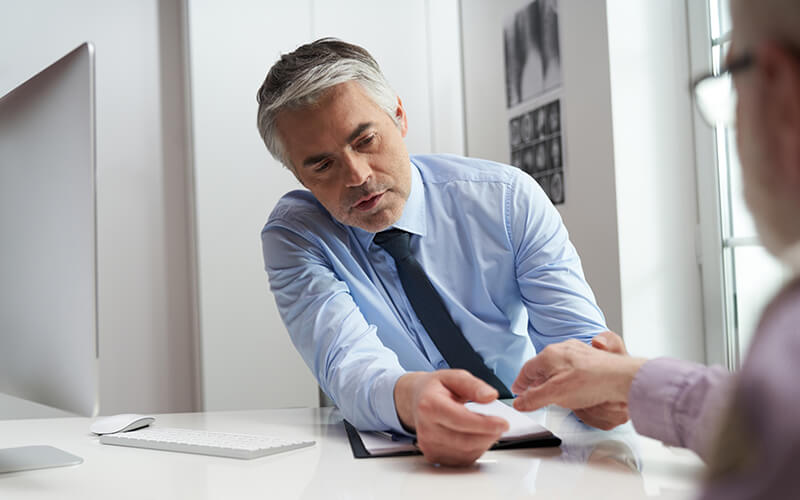 If an underlying condition is the cause of your asterixis, you may develop other symptoms in addition to the flapping hand tremor. The symptoms of asterixis can vary depending on what type of underlying health condition you have, so it’s important to see a doctor as soon as you notice any symptoms so you can make sure it’s not a result of a more serious health condition.

The exact cause of Asterixis remains unknown, even though the condition has been recognized for almost 80 years. It’s most commonly believed to be caused by a malfunction in the area of the brain that controls muscle movement and posture, but no one exactly knows why that malfunction occurs.

However, researchers believe that certain encephalopathies may trigger asterixis. Encephalopathies are diseases that affect brain function and can cause symptoms like mental confusion, personality changes, tremors, and disturbed sleep. Asterixis is most common in people who have toxic metabolic encephalopathy due to hepatic, renal, or pulmonary disorders.

Asterixis is most commonly correlated with liver diseases such as cirrhosis or hepatitis. Impaired liver function is the root cause of most asterixis cases. Liver conditions can cause scarring of the liver, which makes it less productive at filtering out toxins. About 70% of people who have cirrhosis will develop symptoms of hepatic encephalopathy at some point.

While the exact cause of asterixis remains unknown, there are certain risk factors that make you more likely to develop these hand tremors. These risk factors include:

To diagnose flapping tremors, a doctor will conduct a physical exam, as well as various lab tests. Asterixis is tested by something called a hand flap neuro test, which involves the patient stretching their arms straight out in front of them and then pulling their wrists backward. If their hands involuntarily flap with this motion, they may have asterixis.

Your doctor may also check for asterixis at your hip joint, which will involve you lying flat on your back with your face up, knees bent outwards, and feet flat. If you exhibit a flapping motion, you may have asterixis.

Because asterixis is typically due to some sort of brain damage, your doctor will also most likely use an imaging test to determine the extent of the damage. A blood test may also be done to look for chemical or mineral buildup in the blood that could be causing asterixis.

The treatment for asterixis ultimately depends on the underlying cause, and your doctor will have the best idea of how to go about treating it. Some treatment options include:

While asterixis is uncommon, it’s still an important neurological sign to be aware of as it could potentially be a symptom of a serious medical condition. Living with a flapping hand tremor can definitely get frustrating, so it’s crucial to talk to your doctor if you notice these or any other related symptoms. 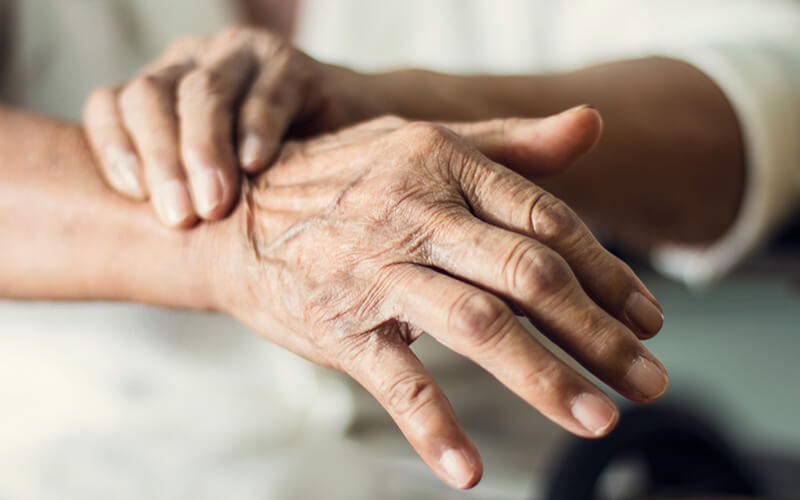 A flapping hand tremor looks like an involuntary shaking of the hands that occurs when the arms are outstretched. This flapping motion can resemble a bird flapping its wings.

How do you test for flapping tremors?

Asterixis can be tested with a physical examination that involves a patient extending their arms out in front of them, pulling their wrists backward, and spreading their fingers with their eyes closed. This is done to see if the “flapping” motion occurs, which is the most telling sign of asterixis.

Can liver problems cause shaking hands?

Liver problems are one of the leading causes of asterixis. A damaged liver can cause toxins to build up in your blood, which can cause tremors. There are various causes of liver damage, such as taking too much acetaminophen and viral hepatitis.

What are signs your liver is not functioning properly?

In addition to shaking hands, there are various other signs of liver failure that you should be aware of, such as:

When properly treated, the symptoms of hepatic encephalopathy are typically reversible. But people with chronic liver disease are more at risk for a recurrence of the disorder, so it’s important to continue to see your doctor and keep an eye out for symptoms that indicate your liver is not functioning properly. 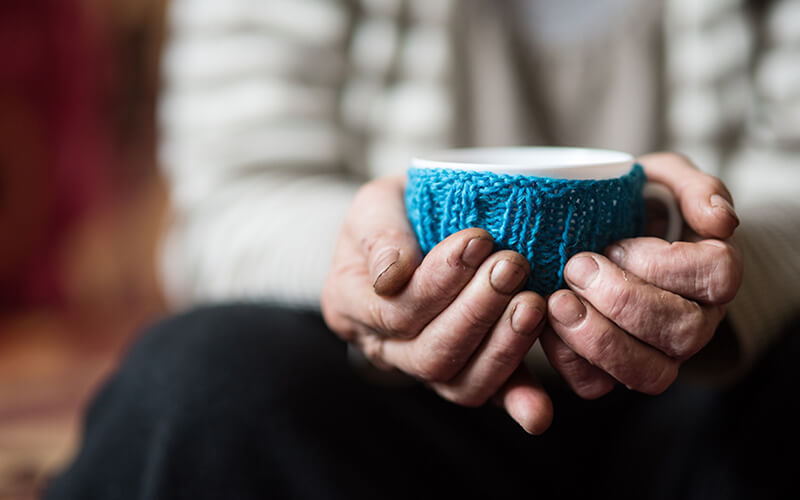 Suffering from flapping hand tremors can be quite exhausting, but fortunately, there are various treatments available out there. Tremors can greatly reduce the quality of your life and can make doing simple tasks, like writing or drinking out of a cup, much more difficult, which is why it’s so important to see your doctor as soon as you notice this involuntary shaking.

Treatment for tremors ultimately depends on the root cause of the issue and can involve anything from medication to physical therapy. If you suffer from essential tremor symptoms, consider Cala Trio therapy. Cala Trio therapy is a non-invasive, drug-free wrist-worn treatment that treats essential tremor with individually calibrated electrical stimulation to specific nerves.

With Cala Trio therapy, you may find that it helps to reduce hand tremors due to essential tremor, thereby improving your ability to take part in normal daily activities. Cala Trio therapy is a safe and effective individualized treatment that can help you find your independence again.